3 Things to Know about Pirates Voyage in Pigeon Forge

1. Get Dinner With the Show

When you come to Pirates Voyage in Pigeon Forge, not only will you be entertained, you’ll also get a delicious four-course meal! Start out with a Buccaneer Biscuit and Voyager Creamy Vegetable Soup. Then you’ll get Cracklin’ Pan-fried Chicken and Bone-in Pork Chops. For the sides, you’ll get Matey’s Mac and Cheese and Jolly Roger Sweet Potato Souffle. For dessert, you get a Walk the Plank Peach Turnover. To go with your meal, choose from unlimited Coca-Cola, tea, or coffee. To accommodate a variety of guests, Pirates Voyage in Pigeon Forge also has a vegetarian menu that includes garden veggie pasta, corn on the cob, herb-basted potatoes, and an apple pie turnover. They also have a gluten-free menu that includes a fruit cup, baked chicken, baked pork chop, corn on the cob, herb-basted potatoes, and a snickerdoodle cookie. Everyone in your group will love the meal!

Do you want your kids to really feel like a part of all the action? Take them before the show to Pirates Treasure where they can get a makeover to become a pirate or a mermaid! Some of the crew will paint your child’s face like a mermaid or a pirate. Your child will also get accessories as part of his or her makeover. They will also receive a pirate flag to wave around during the show. Pirate-themed snacks and beverages will be included during the Pirates Treasure makeover! They suggest coming 50 minutes before the show starts for this immersive experience for your kids. They’ll enjoy feeling like they’re a part of the show.

You won’t be able to believe your eyes when you come watch Pirates Voyage in Pigeon Forge. Captain Blackbeard and his quartermaster, Calico Jack, lead the crews of the Crimson and Sapphire ships in an epic battle to find the hidden treasure. They fight on land, on the ships, and in the water. You’ll see sword fights, canons, and fire dancing. Plus, watch crew members do acrobatic tricks in the air, on the deck of the ships, and into the water. You’ll see mermaids swim, tropical animals do tricks, and so much more. Plus, enjoy lighting and sound effects and pyrotechnics. Your whole family will be amazed as they watch pirates try to find buried treasure!

Once you visit Pirates Voyage in Pigeon Forge, it will be your favorite dinner show! Now you just need a place to stay while you’re in town. Reserve a room with us, and you’ll be close to all the fun things to do! 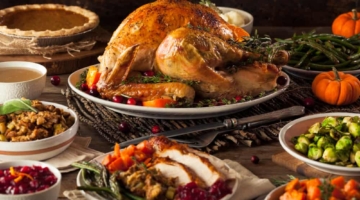