You’ve planned your trip to Dollywood with a list of amusement and water rides you’re excited to jump on. Yet, the allure of Dollywood goes far beyond those adrenaline-pumping attractions. Perhaps you’re looking for something that doesn’t twist your stomach into knots! Did you know that Dollywood features an assortment of entertaining shows?! Here are 5 must-see Dollywood shows:

Dolly Parton guides guests on a thrilling virtual journey through the magnificent Smoky Mountains in this multi-sensory film experience! In Heartsong, Parton, a Sevierville native, shares stories of her home and life! Visitors will experience a real-life outdoor atmosphere inside the theater as they absorb the sensations of changing seasons and weather in the Smoky Mountains. So, come on down to Heartsong Theater and experience this 20-minute Dollywood show from the view of Sevierville royalty!

2. Wings of America Birds of Prey Performers often come in all different shapes and sizes, but these are an entirely different species! That’s right; birds are the focus of this Dollywood show! Located in the Craftsman’s Valley portion of the park, Wings of America Birds of Prey allows visitors to get a close look at birds of prey while learning interesting facts about the creatures and how they live! This 20-minute show is perfect for children with a strong interest in animals. All birds of prey at Dollywood are protected under the American Eagle Foundation.

For 40 years, The Kingdom Heirs have performed at Dollywood, dating back to 1982 when the park was known as “Silver Dollar City.” In 1986, the park became known as Dollywood, and The Kingdom Heirs became the attraction’s resident Southern gospel group! This Southern gospel male quartet has become a Dollywood fan-favorite with its music and message! The Kingdom Heirs has been nominated for and won numerous industry awards throughout the years after getting its start in local churches and concert halls. This 30-minute show takes place at Showstreet Palace Theater. The 1950s and 60s come alive in this musical production that takes many patrons back in time to the days of their childhood! Featuring 12 performers and 4 live musicians, this nostalgic show brings musical hits and fashion trends back to life! The Dreamland Drive-In crowd comes alive and out of their seats to join in during musical numbers. This 55-minute show takes place in Pines Theater.

The Tones are a new mixed acapella group singing tunes with pop melodies, detailed harmonies and a modern vibe! Formerly known as the Gem Tones, this group produces an energetic show that families love! Featuring performers with large, contagious personalities, The Tones has become another fan-favorite of Dollywood guests! Located in The Village Depot, this show runs for 15 minutes.

Now that you’re set with several of the best Dollywood shows to see, how about checking out our hotel just a mile away from the amusement park! Take a look at our hotel near Dollywood and 3 reasons why it’s the best place to stay! 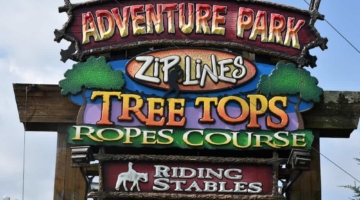 Top 5 Places to Go Ziplining in the Smoky Mountains The Hatfield and McCoy Dinner Feud in Pigeon Forge